With a rich and troubled history of over two centuries, Manuc’s Inn was a silent witness for some of the key events that left a mark in the Romanian and European history. As a rendez-vous place for both foreign travellers and the Romanian elite, Manuc’s Inn was, and still is one of a kind.

With a rich and troubled history of over two centuries, Manuc’s Inn was a silent witness for some of the key events that left a mark in the Romanian and European history. As a rendez-vous place for both foreign travellers and the Romanian elite, Manuc’s Inn was, and still is one of a kind.

The Inn’s story starts in 1806 when it was built on Bucur’s land, on the riverside of Dambovita. Its architecture, unlike the other inns of that time, stood out through its unicity. The founder was Emanuel Marzayan, better known as Manuc Bey. He was a far-famed merchant, diplomat and innkeeper which was considered as one of the richest landlords in the Balkans.

By taking advantage of his wealth and mercantile influence, Manuc started to build up his diplomatic notoriety in the beginning of the 1800s. He gradually becomes a dragoman and counselor for the Turkish leaders and in 1808, he is named by the Sultan as the Bey of Moldavia. He eventually becomes the mediator between the Russian and the Turkish armies. Therefore, the peace that was desired by both parts, becomes Manuc’s responsibility.

The peace treaty from 1812 is a key moment that redefines the Inn’s reputation, as the negotiations are held there. The treaty is signed in May the 16th, 1812 and it marks the ending of the Russo-Turkish war. Furthermore, it settled the boundaries for the territories fought over. 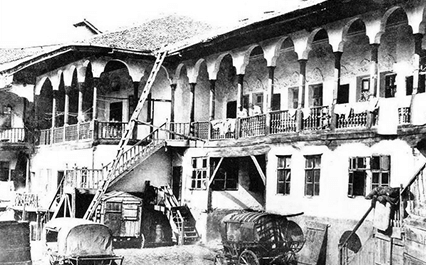 Manuc Bey passed away in 1818. The Inn’s fate ends up in third party guardianship, until his eldest son, Ioan-Murat could administer his family’s assets.

On 20 December 1827 under the control of Manuc's wife, who was often ill, a four-year lease contract is being signed between a church trustee and two companions, Dimitrie Dedu and Nicolae Alexiu.

In 1842, Manuc’s heir is pressured to sell the Inn due to the weakening of the building during the 1838 earthquake. The new innkeeper is Dimitrie Iconomidis, also known as Economu. He owned half of the inn and was in charge of the administration. The other half of the property is split between Gheorghe Iconomidis and Lambru Vasilescu.

Economu dies in 1854, and leaves his fortune to his heir. George Iconomidis, his brother and his associate from the Inn, together with Alexandru Chiropol, question the authenticity of his will. In 1858, Costache Economu, the true owner prevailed.

By the year of 1870, Manuc’s Inn will have had the following landholders : the Greek Panait Vizantie, Milan Lomovici and Dimitrie Constandinescu. The latter, is the first to use the name “hotel” to describe the inn in official documents in 1868.

Due to the trial started by Iconomidis, Chiropol and Costache Economu, in order to split the property, Manuc’s Inn is sold and bought by Vasilescu Lambru. In 1874 he repairs, redesignes and renames the Inn :“The Grand Hotel de la Dacie”. As a result, the inn becomes a true commercial and cultural meeting point of the time and will host various stores, small businesses and welcome many foreign travellers.

The inn remains in the ownership of Vasilescu until 1881 when he faces the danger of losing it because of his debt. In the same year, Vasilescu marries his daughter to Alexandru Baicoianu - a nobleman and magistrate - that takes over the inn and its mortgage.

In the beginning of the 1900s, the Inn’s heir were Aurelia and Alexandru G. Baicoianu. They had two children, Cleopatra and Alexandru. The latter becomes the innkeeper from 1881 to 1916 when he passes away and leaves it to his successors.

Cleopatra Baicoianu had a daughter, Elena, that married a descendant of the Cantacuzino family. This is how the old inn ended up in the property of the renowned family. Elena and Constantin Cantacuzino had a son, Mihai. Mihai Cantacuzino married Cornelia Petrescu and they had three children : Smaranda (that passed away in 1998) and Constantin-Serban Cantacuzino, which is the current inn’s owner.

The blooming season of Manuc’s Inn started with “Hotel Dacia”. In this period, the inn hosted theatre plays, various performances and masquerades, that were the main amusement of the Bucharest youth. The inn was also a meeting point for the local political parties in the years before the First World War. Elites gathered here to plan the great Union of Romania with Transylvania and Bucovina and the war formalities. Some of the personalities that gathered here were Take Ionescu, Octavian Goga, Barbu Stefanescu Delavrancea and Nicolae Filipescu.

The inn was nationalized in 1950, two years after the 1948 Act of the Communist Party, when owners were abusively dispossessed of their goods, properties and lands. The state took possession of everything and the inn was included in the public catering circuit. In the beginning of the 1980s, Nicolae Ceausescu demands that the inn is demolished in order to systematize the Unirii Square. Fortunately, due to the insistence of the chief architect, Manuc’s inn survives. Eventually, it is renovated but the builders replace the wooden floors and beams with ferro- concrete.

During the 20th century, the inn goes through significant restoration, which was essential to its survival. However, it altered the architecture and medieval spirit of the building. The first series of repairs were made between 1966 and 1970 and were crucial for the resistance of the building during the 1977 earthquake. 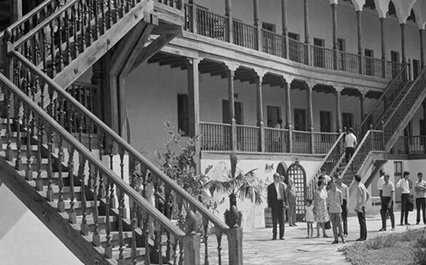 After significant investments and reconstruction efforts made by the Cantacuzino family, Manuc’s Inn, one of the most renowned attractions of Bucharest in the 19th century, came back to life, carrying a history of over two hundred years.

After a long and troubled trial started in 1997, the inn got back in the possession of its rightful owner, Constantin-Serban Cantacuzino. The inn was returned in 2007 through a final and irrevocable order from the High Court of Justice and Cassation.

After several years of cleaning and repair, the inn finally started to look like its original self. The yard pavement and the wooden beams were replaced in order to restore the original Brancovenesc style.

The hotel, the wine cellar, the restaurant and the summer garden were restored according to the stories told by grandparents, in order to convey the inn’s medieval charm - from the times when its fame exceeded the country borders due to its cosmopolitan architecture, exquisite food and glorious events. 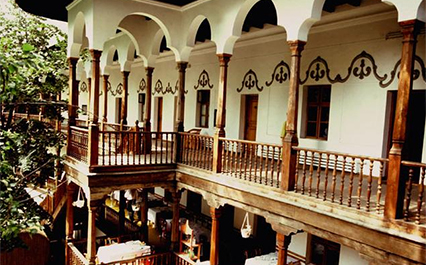 Manuc’s Inn - its present and future

Ever since its foundation, the Manuc’s Inn was the meeting point for the Transylvanian, German, Turkish, Bulgarian and Greek merchants and travellers from all over the world. And not only that it was a commercial and cultural landmark, but it also hosted important historical meetings regarding local and international economics and politics.

Nowadays, Manuc’s Inn still hosts locals and travellers from all over the world. And its mission is still the same, regardless of the time passed by and the difficulties it encountered. The summer garden from the inner yard, the oriental restaurant, the coffee shops, the restaurants and the famous wine cellar are once again full of life and stories. Many important historical figures passed the threshold of Manuc’s Inn, and soon the renting rooms will be named after them as a tribute to their contribution. The inn was, is and will be for a long time from now, a symbol of the joyful urban life, beautiful people and fine tastes. Its rich history goes on with the ambitious plans of today’s innkeepers to bring the inn back to its ancient purpose: to be the greatest place to rest, party and have memorable encounters.